This is one of a series of regular articles featured in Kruger Magazine.

Over the next series of articles, we’ll be looking at wildlife and nature photography with a view to shooting some awesome pics – but I guess we should begin by looking at what you need in the way of camera gear to make things work. Getting set up is really the easiest part – all you need is money and away you go...

First, we must talk about quality. Many years ago, before photography became my way of life, I worked as an industrial engineer in a factory on the Reef in Johannesburg. One of the aspects of our work was to deal with the quality of our products. What is quality? The way we defined it was fitness for use. So, in the text below, remember that – fitness for use. Here’s the thing: if all you want to do is shoot some lovely images to share on Facebook and Instagram, flip through on your iPad or send to your relatives in some faraway land, you don't need the latest professional offerings of the top camera manufacturers. If, on the other hand, you want to make a career out of photography, look carefully at your budget. 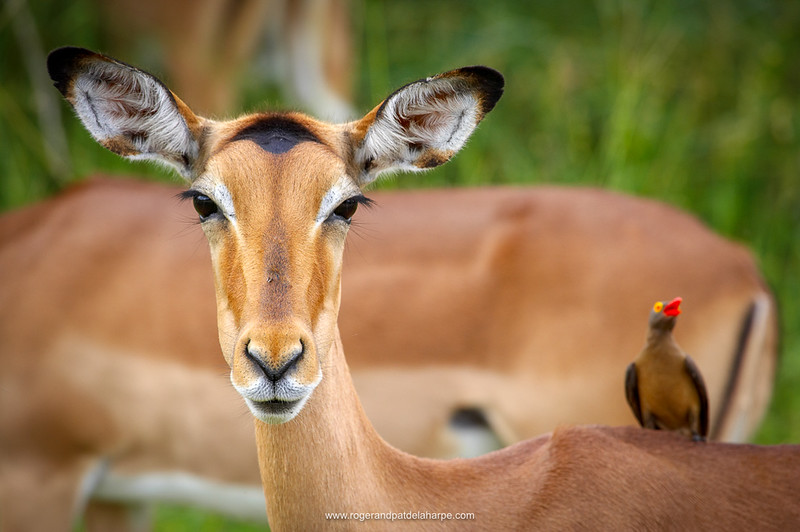 You don’t always have to get out at the crack of dawn, especially on overcast days. It was actually raining when I shot this pic of a an impala and a oxpecker. The diffused light is wonderful for working in thick bush. Canon 1Ds Mk II and 100-400mm Mk I lens. 1/125sec at f/9. ISO200

With the exception of a few purists and film fans, I would say that almost all of us shooting wildlife will be using some form of digital camera, whether it be a high-end, professional DSLR or an iPhone, so let’s have a look at some of the different genres and their pros and cons.

Far and away the most popular camera for shooting wildlife, DSLRs, come in two variants: full frame models like the Canon 5DS R, 5D Mk IV and Nikon D810, which offer stunning image quality, high dynamic range and (mostly) more pixels than we could have dreamt of just a few years ago. One of the very useful advantages of having a huge amount of pixels is that it affords you the ability to crop into the image – pretty much like having a digital zoom. Few of us need 50MP (as offered by the 5DS and 5DS R) but you can easily crop the images, thereby effectively increasing the focal length of your lenses.

I can hear emails being sent off in protest as I write this: “But the image quality on full-frame cameras is so much better than on crop sensor cameras!” Mmm, not so much... Yes, ultimately a larger sensor with the same pixel count will be better, but you’re really going to have to do some pixel peeping to see the difference.

Working from hides like Lake Panic Hide near Skukuza can be very rewarding, although it can be a little crowded at times. In these situations, the humble bean bag is your friend. Nikon D3x and 200-400mm f/4 lens. 1/500 at f/5.6. ISO 400.

You could also consider the new boys on the block – the Olympus OM-D E-M1, E-M5, the Panasonic GH4 and GH5, Sony A7R Mk II and Fujifilm X-Pro2... Awesome image quality, a host of functions, and tiny form factor make these very desirable cameras. Ignore them at your peril The Sonys are full- frame cameras as above, the Fujis are the same size as the Canon crop-frame cameras, while the Panasonic and Olympus are Micro Four Thirds sensor cameras. Because of the small sensor, the  implications for wildlife shooters with M43 cameras are huge – the Leica 100-400mm lens on the GH5 becomes the equivalent of a 200-800mm lens on a full-frame camera. Now that’s pretty useful!

These offerings from the likes of Canon, Nikon, Fuji and Panasonic are awesome cameras for those looking to create some beautiful images, but are a little less interesting when it comes to the actual pastime of photography. They usually have spectacular zoom lenses (the Nikon P900 goes from 24 to 2 000mm in 35mm terms, for example), some shoot RAW images and all are capable of rendering some really fine photographs. If you are not actually wanting to make photography a serious hobby but would like to shoot some wonderful wildlife images, this type of camera could be the one for you.

The scenery in Kruger can be wonderful and you don’t need super-expensive gear to shoot it. But look for focal points that show depth – foreground, middle ground and background. Nikon D800 and 24 – 70mm lens. 1/5 sec at f/14. ISO 400.

In the past, these cameras were not to be taken seriously, but things are changing in a big way and even the humble phone cameras are producing some really fine results.

Many of the P&S cameras have pretty useful zooms (the Canon SX730 going from 24 to 960mm, for example) while others, like the Fujifilm X100F offers just a 35mm lens (in 35mm terms) but spectacular image quality. With the exception of cameras like the X100F, Canon’s G1X, G3X and so on, these cameras won’t match the image quality of the DSLRs and mirrorless beasts, but for many they will provide a compact, cheap (well, relatively), easy way of shooting some wonderful photographs.

Here is one of the most underrated bits of information about photography: lenses are the most important components in photography, way more important than the camera itself. You see, lenses create the image, not the camera body. Sure, we can look at resolving power of sensors, dynamic range, colour reproduction, frame rates, ISO, noise levels and so on and say, wow, this ‘Canokon’ Ex1DC body is awesome and I’ve got to have it and if I do my photography will be spectacular. Maybe. But, if you put a rubbish lens on it, all of that awesomeness that you bought will be for naught!

Also, you know that, one day, you will upgrade the camera body as a matter of course. We’ve all done it in the past and we will do it again in the future. Just make sure that the lenses you buy don't have to be upgraded at the same time.

A few things to think about:

• A new lens (or whatever) is not going to make you a better photographer. Rather, invest in a good photo workshop or safari and learn from the pro leading it, than upgrade that already good lens, body and so on.

• Camera gear is way less important than you imagine. Buy the kit and move on.

• Get the camera to do as much for you as it can (exposure, focussing, white balance and so on) while you concentrate on creating the image

Please let us know what you’d like to read about in these columns - what interests you, what you need to know photographically. Also, hook up on Instagram (@RogerdelaHarpe) and Facebook (@Roger and Pat de la Harpe).

I simply love shooting panoramas (this is a stitch of six images) and you don’t have to limit yourself to scenery. Your subjects need to be stationary if you are to avoid cut-off animals. Nikon D7100 and 24-70mm lens. 1/500 sec at f/11. ISO 280.